In a dramatic finish to the first-of-its-kind competition, a final hole fade out by Zunic elevated Rankin to share championship honours at 5-under – one shot clear of Ben Eccles and amateur Tyson Gill.

Zunic, the 2015 New Zealand Open champion, made a stunning start on the virtual representation of Melbourne’s Metropolitan Golf Club, shooting two eagles and three birdies on the front nine to be two shots clear at the turn. 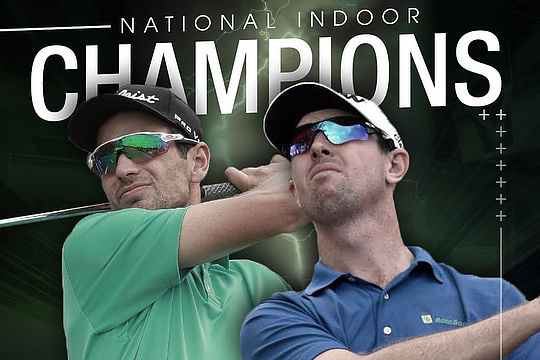 The 28-year-old failed to capture his early form with three back nine bogeys advancing Ben Eccles atop of the leaderboard before a remarkable recovery saw Zunic recapture a two-shot lead heading to the 18th.

But a wild tee shot and an ambitious rescue saw Zunic double bogey at the deathnull and gift Rankin joint winner rights.

The victorious pair each pocketed $2250, with Eccles taking home $500.

“It’s awesome to get a win and play some tournament golf after a couple of months off. It’s been great to get together with the guys and girls here at X-Golf and play against professionals from around the country,” Zunic said.

“Brett Rankin is a tough competitor, so it was awesome to get the win alongside him. Finding the rough on the last hole wasn’t ideal but I got some great shots in and a couple of eagles which I’ll take any day.”

Rankin, the 2019 NT PGA champion, was relieved to return to competitive golf after a lengthy absence due to the COVID-19 pandemic.

“I’m really happy. It’s been an incredibly challenging year, so to be able to return to a competitive environment and finish a joint-winner is very satisfying,” Rankin said.

“We’ve been starved of competitive outlets. I’ve been playing regularly at my local club and have found my performance has dipped because I haven’t been exposed to those high pressure situations, so it was pleasing to stand tall in the final moments.

“Playing in a simulator environment meant we had to adapt quickly. It’s difficult to get a feel for your chipping and putting. It’s great the X-Golf Challenge could fill the void during a season that still is so uncertain.”

The X-Golf Challenge saw some of Australia’s leading male and female professionals compete in an 18-hole strokeplay event played simultaneously across four states.

The event, staged at X-Golf facilities in Adelaide, Geelong, Sydney and Brisbane, raised awareness to the charity Challenge, which supports children and young people living with cancer.

NRL great Breath Anasta and Aussie cricketer Matt Renshaw (both 1-under) were the best performing celebrities.