New South Welshman Jordan Zunic has sensationally won the BMW New Zealand Open in Queenstown with a shot that dreams are made on the final hole of the championship.

The 23-year-old rookie, born and bred in Wollongong, clinched a one-shot victory over Victorian David Bransdon with a stunning shot into the final hole at The Hills.

Needing a birdie at the last to avoid a playoff, Zunic almost holed his approach shot before the ball eventually came to rest only two feet away.

He tapped in for birdie to finish at 21-under 266, relegating Bransdon to second place after a costly bogey at the final hole saw him sign for a 20-under total.

“When I hit it, it felt perfect and I just thought as long as the distance is right this should be pretty good. Obviously when it landed I was very happy,” said Zunic. 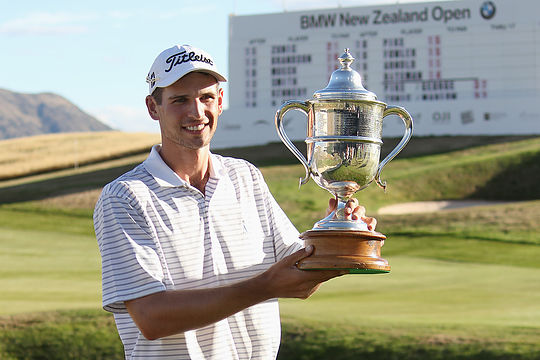 Jordan Zunic is all smiles after securing the biggest win of his career at the 2015 NZ Open in Queenstown on Sunday (Credit: PGA of Australia)

“I’m still in disbelief. I’m trying to pinch myself to say this really happened. I knew I was playing well, but playing well and winning are two different things and I’m over the moon.”

Victorian Kristopher Mueck was in third place at 18-under with Queenslanders Cameron Smith and Brad Kennedy tied for fourth at 17-under.

The richly talented Zunic won the China Amateur toward the back end of 2014 but then missed his card at the PGA Tour of Australasia Qualifying School not long after.

He was playing pennant golf for Port Kembla only a matter of weeks ago before turning professional in January, but gave a taste of things to come with a tied 8th performance at the New Zealand PGA last week.

He was still on the books as a casual in the pro shop at his home club as he sunk the potentially life-changing putt at The Hills to clinch the title.

The NZ Open triumph is also far cry from the predicament Zunic found himself in over 12 months ago after he survived a serious car accident in the United States. His burgeoning career was in jeopardy after fracturing his elbow in three places.

“Since then, it’s been a bit of a rollercoaster ride with my golf, but this is what I want to be doing so I worked my butt off and it’s nice to have some rewards for your hard work.”

The pro shop might need to look for some new help now that Zunic has secured exemption on the PGA Tour of Australasia until the end of 2018, with the added bonus of three starts on the Japan Golf Tour this year.

“I was planning on having to pre-qualify for everything later this year and I didn’t even know about the Japan starts until they told me at the end so that’s unbelievable too. I just can’t wait to start the journey – this is only the beginning.”