Back to the Future for Royal Queensland

Opened in 1920 and granted ‘royal’ charter a year later, Royal Queensland has been the site of many important tournaments in Australian professional and amateur golf. 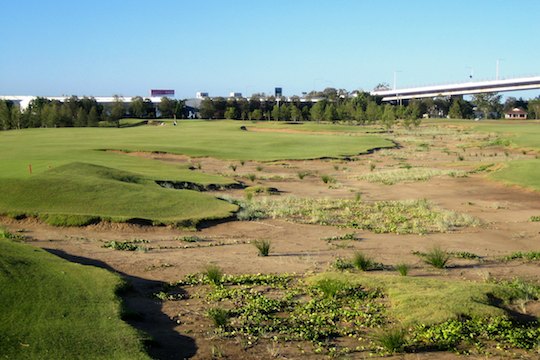 It has hosted almost all of the world’s best players, dating back to exhibition matches featuring Gene Sarazen and Walter Hagen in the 1930s.

In 1966, ‘The King’ Arnold Palmer won one of three Australian Open titles held at the club, in addition to the staging of multiple Australian PGA Championships, Australian and Queensland Amateur Championships and a host of other professional events.

Royal Queensland has also been synonymous over the years for a number of household names in Australian and world golf.

Long-time course professional Charlie Earp retired in 2003 after 45 years at the club and two of his most famous protégés, 1990 US PGA champion Wayne Grady and former world No.1 and dual British Open champion Greg Norman, cut their teeth under Earp at Royal Queensland.

Norman’s deeds at the club in the 1970s as a member and then trainee under Earp are legendary; from his voracious practice habits which left the practice range looking like a war zone and years later, hitting a golf ball over the original Gateway Bridge that looms over the course.

If you’re wondering what’s so special about hitting a ball over a bridge, you will need to visit Royal Queensland to appreciate not only the scale of the structure but the shot required to clear it!

A little known fact about Royal Queensland is Dr Alister Mackenzie visited the site during his whirlwind visit to Australia in 1926 and provided a plan for the design of the course.

While his suggestions were implemented, the course had been altered so much over the years it was unrecognisable as a ‘Mackenzie’-inspired layout.

Therefore the Queensland Government decision to acquire part of the club’s land to create a second major bridge over the river was a gilt-edged sword for the club.

The land acquisition and need for a course revamp would prove a disruption to the members no doubt, but also an opportunity to herald the start of a new era, by turning back the clock.

Former Australian and European Tour professional Mike Clayton was commissioned to undertake the work and grasped the opportunity to return the course to something akin with Dr Mackenzie’s original intentions.

A former Australian amateur champion at Royal Queensland and now a highly regarded course designer, Clayton said at the 2007 opening of the new layout: “The new course reflects the understated, low-profile nature of the original that was influenced by Alister Mackenzie. Part of Mackenzie’s vision for the course was ‘flashed sand-style’ bunkers, similar to those found on Melbourne’s sandbelt.”

The golf course is located on the north shore of the Brisbane River to the east of the city and only a few kilometres from the city’s international and domestic airports, on reclaimed mangrove swampland.

The terrain is naturally flat and had a predominant clay base, conditions which are not always conducive to prime golf country.

Despite the inhibitors, Clayton not only reconfigured the whole golf course but installed other infrastructure and wetland areas to provide additional aesthetics and hazards to the course.

The result is a formidable layout, particularly with regard to the greens and bunkers which are now in stark contrast to those he started with.

One of the other primary changes from the previous layout is the amount of room now available from the tee.

Playing with professional Matthew Rogers, we were both able to swing freely with our drivers on just about every par four and five, which was an enjoyable aspect of the course.

Being exposed to coastal breezes, Clayton has allowed plenty of space from virtually every tee but positioned his fairway bunkers and slopes near the greens to require you to think ahead for a ‘best’ line of attack from certain spots in the fairways.

A sleeper hole in this regard is the 13th. At 370m, it is not an overly long par 4 and appears to be fairly innocuous as you look at a wide fairway with plenty of room down the left hand side, away from a fairway bunker pinching in on the right.

Taking the safe line down the left, however, gives you a problem with depth perception for your second shot to the green, as a bunker protrudes at eye level some 40m short of the green.

The approach from the left also brings into play a steep slope in the front and left side of the bunker-less, diagonally positioned green.

The best line is from the right half of the fairway, avoiding the bunker in the line of sight and allowing you a play more along the length of the green.

The back left pin location on this hole is perched precariously above the steep slope in front and an ambitious putt of any kind could see your ball falling off the green into the swale below.

Likewise, a weak chip from this swale will see the ball rolling back to your feet.

Clayton has included a number of short par 4s in the new layout that in the right conditions, can be driven by longer hitters.

However, the ‘reward’ for getting on or near the green is often a treacherous pitch or putt from a long distance with multiple swales and slopes to contend with.

The 298m 12th hole is a case in point. A lay-up avoiding fairway bunkers can be played with as little as a 5 iron to leave a full wedge shot to the maddening green; or a driver over the bunkers will take on green side bunkers, steep undulations and water to the right.

Depending on the pin location, an adventurous player may even opt for the neighbouring fairway to the left to open up a better line to attack a flag along the back shelf of the green.

The aprons around the greens are all closely mown to allow for a variety of short shots or even putting from off the putting surface.

These closely mown surrounds, in true links fashion, not only allow for a variety of shots but also take the ball away from the green on errant approaches.

On many occasions during the round, Rogers and I dropped a ball or two at the base of a swale near a green to try some of the chipping challenges Clayton has provided.

Playing in winter, the greens and surrounds we encountered were firm and bouncy and I imagine the challenge for the club will be to maintain these closely mown playing surfaces at the height of the tropical Queensland summer.

It would be a different golf course in softer conditions with stronger grass growth, presenting a different set of challenges. 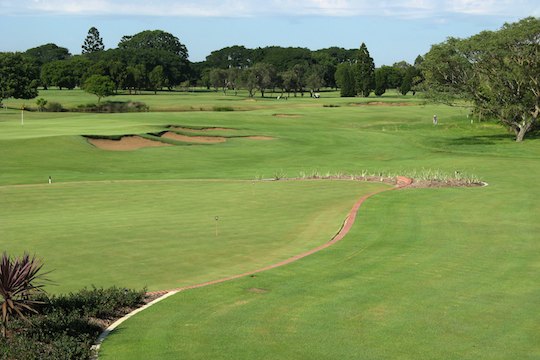 The golf course still retains the huge Moreton Bay fig trees although they do not feature in the lines of play as much as previous, with the exception being the tee shot on the 10th hole.

Similar to some of his redesign features at The Lakes Golf Club which hosted the recent Australian Open, Clayton has introduced a lot of natural looking, sandy waste areas which are not so severe that golfers of all standards cannot play from them.

The 400m 3rd hole has a waste area that runs from tee to green along the right, encroaching into the fairway at about the 260m mark, but there is ample fairway to the left and like many of the holes, a generous opening to allow players to run the ball in to the green.

The short 17th hole, only 125m in length, has sand and natural grasses from the tee all the way to the small and treacherously sloping green.

The golf course on the whole is not overtly long and plays to a par 72. It has 5 par fives and only one of them, the 7th hole, measures over 500m in length from the back tees.

The toughest hole on the golf course is the par four 5th, which can be stretched to over 420m from a back tee in the shadows of the looming Gateway Bridge.

With the Brisbane River to the left and an undulating fairway and large trees to the right, I found it a stern test and another well designed hole that rewards placement in the right portion of the fairway to get a good look and line into the green.

The collection of par 3s on the course offer variety of length and challenge, with the pick being the short 17th and the long 8th over a water course that crosses diagonally in front of the large, well bunkered green.

Greg Norman might not recognise the new practice facilities on his return to Royal Queensland these days.

The members are well catered for with a range plus excellent chipping, putting and wedge greens just a few steps from their parking area, plus another more private Members Only range running next to the 3rd hole.

Members also have use of tennis courts and clubhouse extensions will be completed over the next 12 months to upgrade their facilities even further.

While Royal Queensland is a private club, interstate and overseas guests can enjoy the golf course and facilities midweek by arrangement with the club.