You want fast? Then Monash Country Club might make you pay.

The course which really can lay claim to being one of Sydney golf’s hidden gems, probably boasts the quickest greens in Sydney. 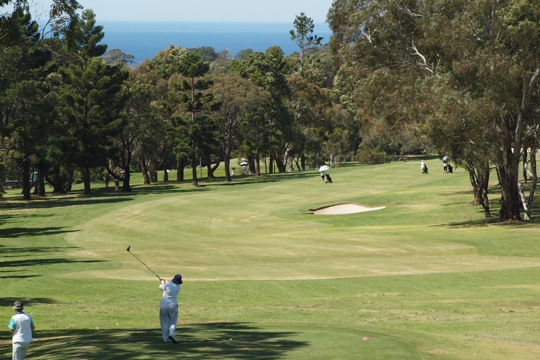 How can that be, I hear you ask? Well, we measured them for a start.

Then we played them as well, alongside course superintendent Paul Gumbleton, who even battled to avoid the three putts as much as we did.

We confirmed they were running at something like 12 on the stimpmetre that day – a good test for anyone’s stroke.

“To be truthful, some of the coastal courses just cannot have their greens as quick as ours because they had winds off the ocean so strong the ball wouldn’t stay on the green,” Gumbleton grinned.

“We don’t have that problem here, although Monash does get a lovely breeze most of the time and, like most courses I guess, can be brutal if it really starts to blow.”

Monash Country Club has a marvellous history and an extensive list of members, many of them not short of a dollar or two – and they have never been frightened to spend money to give members a pleasurable experience.

Despite living in the eastern suburbs, Dinte, yes, you know the name from the famous putters and also probably the name inside the golf cups your putt drops into, treks over the Sydney Harbour Bridge two and sometimes three times a week for his regular golf game or a meeting with the committee at Monash.

He’s been doing much the same thing for more than 20 years.

In truth Monash Country Club is a lot more than that, to a lot of people.

A host of present and past footballers find it their perfect hideaway.

Former Manly-Warringah and Australian rugby league hooker Max Krilich has led the way there with many club championship and pennant wins during his post-football career.

So many others have followed him there.

And if you have been wondering where the name came from, Monash is named after Lieutenant General Sir John Monash, one of Australia’s greatest soldiers.

Most would be aware the golf club started life as a Jewish Social Golf Club.

In 1946 those hardy campaigners decided to build their own golf course.

It was no longer to be a Jewish golf club, but a club anyone could join, irrespective of his or her faith provided, of course, they met the entrance requirements of the membership committee.

Toward the end of 1947, the bulldozers went to work clearing the property in readiness for the actual construction of the course.

As far as the clubhouse was concerned, an 80ft x 20ft hut was bought from the air force as a temporary measure and plans were implemented to build a clubhouse that would be in keeping with the golf course itself.

In 1950 the first nine holes were opened for play, and in 1952 the clubhouse was finished.

In December 1957, disaster hit Monash when a bushfire gutted the clubhouse at a time when the club was suffering from one of the worst droughts in history.

New plans were drawn and a much bigger and more luxurious clubhouse was built in 1959 and the club was raised to group one status by the New South Wales Golf Association.

Since then various improvements have been made to the clubhouse, which culminated in the completion of major extensions in February 1992.

The clubhouse facilities and golf course are constantly being reviewed to provide first class amenities for members.

Yet it is the course Gumbleton has taken particular pride in, improving the quality of the venue with minor improvements.

Gumbleton came from a nearby course about two years ago and immediately set about introducing many subtle changes to the private course.

He has cleared out areas that were previously covered by moss and dirt, revealing some lovely rocky outcrops and even the occasional waterway.

He and his staff have built impressive sand receptacles on most of the tees, doing away with unsightly concrete barrels.

So let’s get down to the layout: The Monash course pattern is traditional – four par fives, four par threes and 10 par fours for the men, with an extra par five for the women.

The sequences are never dull and boring and unlike so many quality courses you see these days, there is no sameness about any of the holes with the possible exception of the parallel first and 10 – both par fives.

The dogleg right par four (about 265m) fourth – which requires a long and strong fade around the trees to set up a good mid-iron to a raised and, obviously, tricky putting surface.

The par-five (465m) ninth – a superb dogleg left which invites you to try and aim over the trees on the left and stay left of a bunker up the right side of the fairway. Two good hits and you might only have a wedge in – for the normal golfer, that is.

The 13th, a short but thought-provoking par four measuring just 315m. The challenge here is to keep your tee shot on the fairway as everything feeds left to right when it lands.

A good tee-shot (or maybe also a chip-out if you go left) leave a short iron to another raised green. Don’t go long or you’re ‘dead’.

The 18th is also one of the great short par fours. It only reads 311m but there is some trouble around and if you hit a mediocre slice you won’t be going for the green in regulation. There are plenty of birdies here but just as many bogeys or worse.

The whole course offers plenty of birdie opportunities – but you will need your blade to run hot for a good round at Monash Country Club.

And like just about everyone who plays there, you’ll be proposing a return visit and planning to make sure you keep your ball ‘under’ the hole on all your approach shots.

I know I will.