Legend tells us that wherever that great white horse with wings named Pegasus, planted his hooves on the earth, an inspiring spring would burst forth.

Thankfully that is not the case wherever your ‘flying’ golf ball lands on the Pegasus Golf and Sports Club just north of Christchurch on New Zealand’s beautiful South Island. 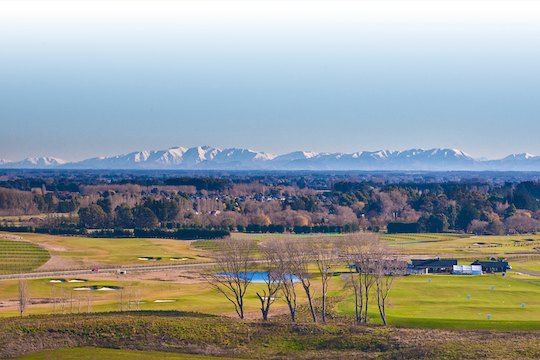 Say what you like about our Kiwi neighbours and their sheer delight in beating Australians at rugby – or anything else for that matter, but you have to hand it to their golf course architects – they know how to build something Heavenly for their golfers.

This latest slice of Heaven is the Pegasus course and to prove their point, the owners added a woman’s touch to make the place even more special for golfers who like to travel.

Set near the foothills of the famous Southern Alps in North Canterbury, Pegasus Golf and Sports Club has already “won” over former women’s world No 1 player Laura Davies, who scored a win there at the New Zealand Women’s Open last year.

Davies was rapt that the newly-opened Pegasus had been co-designed by a woman, Kristine Kerr, and proceeded to show that the course suited her game too, surging home on the final day to beat Sydney’s Sarah Kemp, Sweden’s Pernilla Lindberg and Norway’s Marianne Skarpnord by two shots.

Now Davies has declared she’ll be back in the New Year to defend her title because, like most of us, she has fallen in love with New Zealand.

Although still a “foal” as far as courses go, Kerr’s effort received praise from the very top of the tree: Sir Bob Charles, also a prolific designer in his own right, was quick to sing his praises of the new layout.

Kerr, who is a member of the Australian Society of Golf Course Architects, is no different to most women – she likes to do things “her” way.

She not only lays out her courses, she also gets involved in the master planning of the entire course area, including clubhouse and plantings.

Creating a course from raw land, such as she was presented with at Pegasus, certainly presented a challenge.

“One of the first things we had to do was untangle a sheep from a fence, I remember having to do that,” Kerr said.

“There was not a lot to work with in terms of natural topography because of the rural setting. Mature trees help a course fit into the landscape.

“When the land is flat, as it was at Pegasus, it was almost like you had to create everything from your own imagination.

“The only thing that was there was the entry road on the drawing.

“Still, we knew it had to be a par-72 course and that it would be a course for the residents, meaning if they were playing it all the time it would have to be forever interesting.”

Most will agree Kerr and her assistants have done a marvellous job since she returned to New Zealand from China especially to tackle the Pegasus design.

Pegasus has been designed to appeal and challenge all levels of golfers.

Certainly the location of bunkers, lakes and areas of natural wetland at varying distances from the tee and the provision of alternate lines of play provides opportunities for golfers to consider strategy as well as skill and accuracy.

Reports are the locals turned out in force to watch the New Zealand Women’s Open when it was played there in February.

Now they are champing at the bit to welcome many of the world’s best players back for a re-run.

According to the Pegasus Town managing director Bob Robertson, hosting an international tournament was a fantastic opportunity to showcase the Pegasus Golf Course and Canterbury to local as well as international audiences.

Evidently more than 10,000 people took the opportunity to watch the Open in 2010 and New Zealand Golf CEO Dean Murphy said the tournament was already a flagship for the women’s game in this country.

It is exciting for golf fans to watch these world class players, and also young women who may be motivated as a result to take up the game,” he said.

“At the same time it offers a vital opportunity for some of our best young amateurs and home professionals to compete against the best.”