If we all shared the same opinion, what a boring world ours would be. Perceptions differ on many things, and the respective challenge of any particular golf course can lead to much spirited debate.

When I informed a golfing companion I was heading north and planning to play Sea Temple (formerly The Links) at Port Douglas, he was less than enthusiastic. 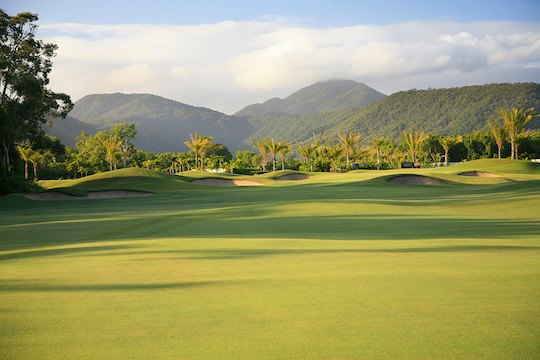 “It’s pretty boring,” said the six marker. “And when I last played there it wasn’t in real good nick.”

To that opinion I say bunkum. He must have played the course from the red tees, accepted ‘gimme’ putts under 20 metres and is possibly impassive watching Tiger Woods smash his driver 300-plus metres.

When I recently walked off the 18th green at Sea Temple – with a par, I might add – all I wanted was to get back to the first and play the course again.

Mark, my adult son holidaying from Melbourne, and I had conquered the par 71 (6125 metres from the blue markers) in a tick under 3½ hours. The morning was an absolute treat.

Okay, so Sea Temple is a links course and as such the landscape of the layout might be considered a tad uninteresting. But the lack of trees also means wide, somewhat forgiving fairways, something that did not particularly displease this 16 handicapper.

And while the fairways may be generously proportioned, so are the greens. Ten and 15, for instance, are combined and the area is almost big enough to hold a Brisbane Broncos training session.

Both the greens and fairways are undulating – especially the greens. The first is an absolute ripper and I suggest many opening four-putts have been carded when the greens staff member plotting the pin placement was in a mischievous or miserable mood.

The Thomson (Peter), Wolvewridge and Perrett-designed course also chides the unsuspecting with 89 bunkers, many so well manicured in to the landscape that some non-attentive golfers driving back down the fairway in search of an errant ball have disappeared in to the trap of sand.

While Sea Temple may not be an excruciating challenge from the white markers for those who hit it like Tiger, the good-to-average golfer will enjoy the experience.

The day we played there the greens were a week or two from fully recovering from what I was informed was verti cutting – a process to remove excess organic matter from beneath the surface. Rather than punch holes in the green, the verti cutting process uses blades to cut through the surface, remove the organic matter and also cut the runners, to promote new and denser growth.

As a result, the greens offered a railway track effect, and were also a tad bumpy. But the course itself was in pristine condition despite an unseasonable October deluge.

And the weather too was brilliant the day we played. However, with the Coral Sea less than one kilometre away and the golf course bounded by the Dagmar Range, I suggest windy conditions would present rather more testing conditions.

Bunkers, mostly huge undulating greens and tropical winds are not the only obstacles at Sea Temple. Crocodiles Linda and Fat Guts are – apparently, because we did not see them – other obstructions to be avoided.

My errant drive on nine ventured in to the lake where Linda is said to reside, and rested precariously on a mud pile adjacent to the fairway. But the Titleist was left where it sat. It was now Linda’s ball.

Golf Operations Manager David Robertson, a Wests Tigers fan, says Sea Temple does not have a signature hole as such, but most locals regard the par three 11th – named the Pulpit – as something rather special. Only a short hole – 138 from the back tee – it is water or wasteland bound on three sides and presents a difficult double-tier green.

Personally, I liked 13, a 321-metre par four superbly framed by the mountain range. The green is tucked in behind a large mound and any drive right of centre results in a blind second shot. However, the giant flag – nicknamed Oompa Loompa by the locals – proved an accurate yardstick.

With just 67 members and an average 70 playing the course daily, access to Sea Temple is usually a cinch. Obviously the wet season (they prefer to call it the green season) between January through April can be uncomfortable, with May through to October ideal.

And take my tip – play as early as practical because the early-morning sun enhances the natural beauty and setting of this magnificent golf course.