Country Australia is renowned for its rural golf courses. And one region that prides itself on what it has to ‘lure’ the travelling golfer is South Australia’s Riverland region consisting primarily of the towns of Waikerie, Barmera, Berri, Renmark and Loxton.

Situated north-east of Adelaide and an easy drive via Mildura from Melbourne, these towns, with their unique courses, have for too long been the forgotten items on the golfer’s itinerary. 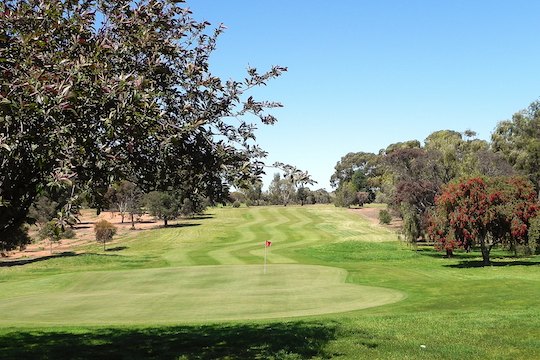 That’s a shame because all of the clubs in this region welcome visitors with open arms and, depending on which way you might be travelling, can have a tremendous influence on where you begin your first taste of Riverland golf.

Driving from Melbourne, we decided to make the trip via the Western Highway to Horsham, then on to Bordertown in South Australia before then heading up to Pinnaroo and on to Loxton.

It is not a difficult drive but a stopover at Horsham to see how the course and club have progressed after their disastrous “Black Saturday” bushfires seemed like a good idea too.

Arriving at Loxton, which is 255 kms east of Adelaide, we found it was surrounded by vineyards, orange and citrus groves and boasting a the golf course which is around 8 kms from the township but has been well ranked in South Australia’s top 10 and comes highly recommended by locals and visitors alike.

Leaving Loxton, the next stop should be Berri which is situated right on the Murray River and the Big River Golf and Country Club which is about 21 kms from Loxton and offers a total package of excellent golf and accommodation.

The Berri Golf Club offers beautifully-presented grass greens that have a true putting surface with fairways that are defined by established flowering gums, native and Mallee trees and providing an easy walk over its 18-hole lay-out.

Then it was on to the town of Renmark, another of the Murray River’s famous towns in this delightful part of Australia.

And the Renmark Golf and Country Club, like its Berri counterpart, is an excellent choice for a stay and play.

If on the off-chance the accommodation at the Country Club is completely booked out, the other choice is the magnificent Renmark Hotel on the banks of the river and right in the heart of the town.

General manager Michael Schutze has gone to great lengths to accommodate the visiting golfer and the packages of golf and accommodation are well worth looking at.

Renmark golf course is fairly unique in that after playing every three holes the player ends up back at the clubhouse and this can be gratifying when the temperature rises during the summer period.

With tight tree-lined fairways, Renmark can be a test for the best of players and it has often been lauded for its couch fairways and well-manicured greens.

Like many of the courses in this region, Renmark is also an easy walking lay-out with 11 holes on the flat Murray River plain and gentle undulations on the other seven.

Just off the edge of Lake Bonney, one of South Australia’s best aquatic playgrounds, you will find the Barmera Country Club and, like Berri and Renmark, it also offers some comfortable on-course accommodation.

With a distance of 6,110 metres for men and 5,303 for women the course has gently undulating couch fairways that are fully-watered.

A feature of the course is actually the dry creek bed that crosses in front of the par-four 15th hole.

With its length of 337 metres that doglegs from the tee, a drive of about 200 metres is required to be able to see the green and play a short pitch to the putting surface.

As it has been said before, the best has been left to last and a visit to the Riverland should finish with a game at the unique Waikerie Golf Club.

This course is also quite unusual in that with a length of just 5,977 metres and a par of 72 for men and 5,261 and 72 for women, there is not a bunker to be sighted anywhere on the course – you’ll get no complaints from me.

With magnificent tree-lined fairways the tee shots here are tight and with some elevated greens a lot of care has to be taken with the approach shots to score well on each of the well laid-out holes.

I found Waikerie was a delight to play and with a staff of only two, it is a credit to those who run the club on what they have been able to do with such little ‘manpower’.

This well-presented course is a must for anyone wanting to visit this area on a golfing holiday.

The Riverland region has been relatively forgotten and sometimes passed over by golfers driving from Adelaide or Melbourne to Mildura in north-western Victoria.

But it does give another option that must be looked at for those play and stay ‘devotees’ who love to pack their clubs and take to the road.

The weather on this visit was superb and as well as golf there are many vineyards and wineries to visit and the local produce can be tasted at many of the fine restaurants throughout the area.

Try it, you will like it, and I promise you will be pleasantly surprised by the entire region and what it has to offer as well.