With the fever of links golf upon us following The Open Championship, we arguably have one of the finest links layouts on our doorstep in Sydney.

St, Michael’s Golf Club is a spectacular links course shaped by nature that lies along the cliff tops of the Pacific Ocean just 15km from the centre of Sydney. 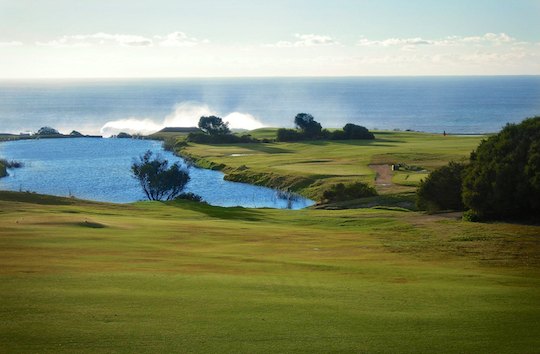 What started out as humble beginnings in 1932 with the foresight of a small but devoted bunch of golfing enthusiasts, headed by businessman Ray Vaugh and the Right Reverend Monsignor James Meany, the last 75 years has seen St Michael’s evolve into a championship layout and home to many an Australian Amateur champion.

There is no doubt St Michael’s attracts the better player and at 6345 metres from the blues, not overly long by modern day standards, it is a layout that demands respect from every aspect of the game.

“St Michael’s is not your traditional architect’s blueprint. Our course offers a number of interesting blind shots with danger everywhere with Eastern Suburbs Banksia shrub hugging many of the fairways and small flat-like greens.”

The course has undergone slight changes over the years with some previous enhancements being fairly criticised.

Recent modifications to the changes under the watchful eye of the new superintendent Russell Fletcher – a veteran of three Australian Opens – has seen the return of the links-like features.

“We have transformed some early changes to see our natural links layout back,” says Wagner, a former tour and US Collegiate player.

“We have no weak holes here. Because of our location on the coast, the course is susceptible to the wind and the wind is the course’s defence.”

The layout is respected and those who know how to play St Michael’s appreciate precision off the tee is more important than length.

“The par 3, 5th hole I consider to be our ‘signature hole’, says Wagner.

“It is 203 metres through a natural sand blowout to a green that slopes back to right. Miss the green and get on the wrong side of the pin really gives you no chance for par.”

There are many ‘spectacular’ holes at St Michael’s, each with their own unique challenges. The monthly medal sees the ranking easily move up to 75 on this par 72 layout and returning a score itself can become a challenge.

St Michael’s is a must play layout and was chosen last week by the Manchester United soccer team for their preferred venue for a game.

“We are very fortunate to have the natural beauty which this course has,” says Wagner.

“We have attracted a strong junior program and our representative teams are strong. Our Men’s Major Pennant team has won three Division 1 flags in the last three years and we have strength in our membership base.”