Greg Norman was obviously in a benevolent mood when he recently inspected Pelican Waters Golf Club and gave his seal of approval to the first upgrade at the Sunshine Coast championship course since its opening a decade ago.

Extensive upgrading of bunkers – even the removal of some – was among the modifications given the tick by the Great White Shark to ‘improve the playability of the course’ for both members and guests. 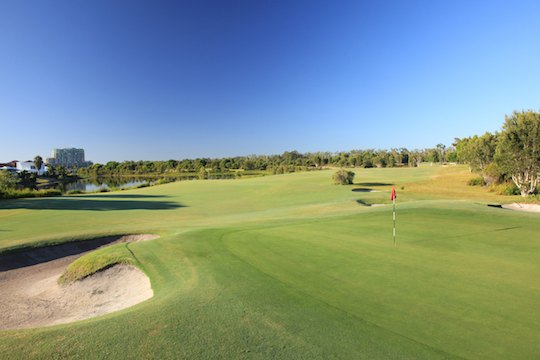 And Pelican Waters Golf Club general manager Tim Gall was delighted at Norman’s endorsement, believing the alterations would ‘refresh’ the course which maintains its top mantle in the region and one of the elite golf experiences in Australia.

Following some rather ordinary weather conditions in recent years – both flood and drought – like most golf courses Pelican Waters has not been immune to the adverse effects of the elements.

Gall described the upgrade – currently underway – as a ‘general tidy up’.

“This work was always intended to coincide with the 10-year anniversary of the official opening of the course and will enhance the experience for golfers of all levels, from the average player to the professional,” said the former pro golfer.

“The changes represent a maturing of the course and reflect the modern, dynamic design of the Greg Norman-signature courses.”

But while the changes will affect 12 of the 18 holes, the disruption for players is negligible as I discovered during a recent round.

Aesthetically the course has not changed. It remains one of the most challenging yet enjoyable golf courses imaginable and stands as a fine legacy to Norman. Pelican Waters is by no means an easy course, but from the member’s tees is an enjoyable test for those who hit it straight.

But it is not just a member’s course. For the low markers who seek the ultimate test and gratification, the championship tees add 400-plus metres, and plenty of anxiety too, I would suspect.

Sure there is trouble waiting for the errant shots, but what would golf be without a spot of bother here and there? Water comes in to play on seven holes – mostly on the front nine that faces north.

The generally south facing back nine has some water, but Mother Nature’s trees can cause some issues there if the dreaded hook or slice emerges from the bag of tricks.

One of my favourite holes is the picturesque third – a 465 metre (498m from the black tees) par-five with a lake along the right.

Long hitters can have a crack in two, but danger looms with a narrow opening to a smallish green, water on the right and unfriendly country at the back.

I also like the short fifth (334m for members) which requires an absolutely precise drive. Water is down the left and bunkers litter the right, while a small but hungry waterway crosses the fairway about 60 metres in front of the green. Overshoot this green and 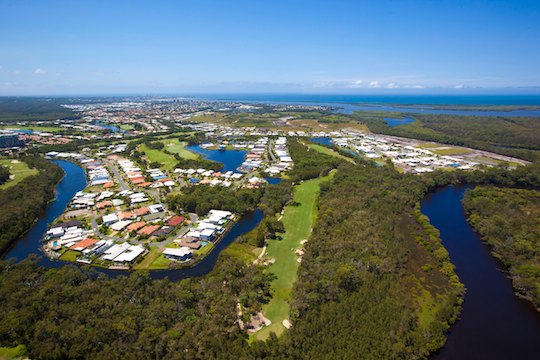 Pelican Waters with Caloundra in the distance

But there is little doubt the real challenge for all golfers at Pelican Waters, irrespective of handicap, is the par-four 18th. It is a monster dogleg left at 420 metres (black tees), with bunkers protecting the green on both sides and water at the right and back.

Anyone who pars 18 heads to the superbly-appointed clubhouse well pleased with themselves I would suggest.

If endlessly searching for golf balls is not on the agenda, playing Pelican Waters in a cart – which is recommended – is not a five-hour affair. My playing partner and I teed off just after 7am and were back in the car park by 10.30.

Pelican Waters set a standard very early in its life when named one of Australia’s Top 10 resort courses in its first year of operation.

It remains classed among the premier courses in the world, is ranked 44th in the top 50 courses in Australia and Top 10 in Queensland.

And designer Norman makes no secret of his love for Pelican Waters either.

“I love Pelican Waters. I love the turf here, I love the way the ball feels off the clubface and the tee shots are set up well off the back tees,” he said.

“I really like it. It’s a good test of golf and it’s going to be a better balanced golf course after we finish these changes.”

And if anyone should know, he should.