PowerBilt is the only golf manufacturer to infuse a clubhead with nitrogen gas, which is safe and resistant to leakage. 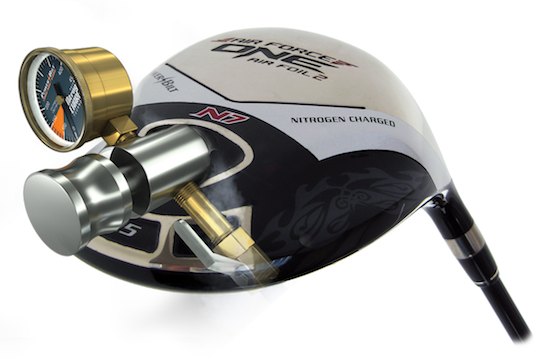 The air pressure, which can be as high 150 psi, supports the face with no mechanical bracing. This allows PowerBilt to create the thinnest face in golf and the largest sweetspot.

“PowerBilt is at the forefront of ‘what’s next’ in golf club technology,” said Ross Kvinge, president of PowerBilt.

“This provides real benefits to all golfers – no matter how fast they swing – so they can maximize their ‘smash factor.’” (Smash factor is a term referring to the amount of energy transfer from a golfer’s swing to the ball.)

With Nitrogen-Charged Technology, PowerBilt’s Air Force One clubs are the only clubs on the market offered in multiple face thicknesses (not to be confused with variable face thickness, which other companies tout).

“Giving a golfer the opportunity to match his or her swing speed with the appropriate face thickness means all golfers will be able to flex the face like a tour pro,” said Kvinge.

Each Air Force One clubhead is coated on the inside with a leak-proof resin and then charged with nitrogen gas to pressures as high as 150 psi. The air pressure provides the appropriate face support so that each driver performs within USGA regulations.

Fujikura – one of the most popular shafts on the PGA Tour – is the stock shaft on the Air Force One. The flex point of the shaft will also help optimise spin rate.

Another key benefit of Nitrogen-Charged Technology is a heel-to-toe sweet spot. The absence of mechanical bracing means more of the face is able to flex at impact.

The Air Force One driver will also be offered in two shapes – a geometric shape that maximizes Moment of Inertia (MOI) for straighter shots and a tour shape that allows better players to work the ball.

We’ve heard of some unbelievable changes in club technology over the years, but loading a golf club with nitrogen gas still has us shaking our heads in amazement.

It sounds like a gimmick at first, but be rest assured, the Air Force One does it all. It has been designed to cater for golfers with different swings and talent levels. PowerBilt claims most golfers will see 10 to 20 yards more in driving distance. What we noticed was how forgiving the new Air Force One Driver was for an inconsistent swinger.

A slight mis-hit was still rewarded with generous distance thanks to the club’s trampoline effect created by its face thickness and nitrogen ‘engine’.

We’re tipping this hot release is going to be one of the big stories of 2011 and a popular purchase for high handicappers.

Ladies and gentlemen, Air Force One has just landed and we think it will go the distance.