Following the success of the original Corza Ghost, a golf ball-white coloured mallet which was used two to capture two wins on the PGA Tour in 2010, TaylorMade Golf has introduced the all-new Ghost series putters. 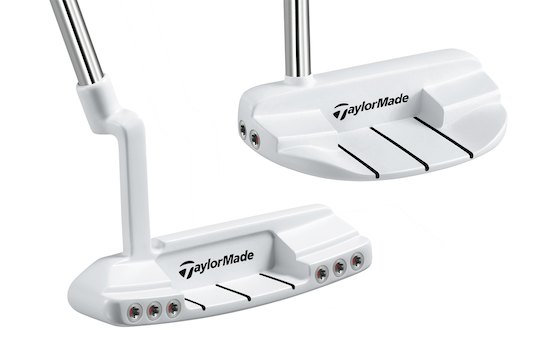 Inspired by the immense Tour success achieved by the Corza Ghost and TM-110 Tour models in the past 12 months, including Paula Creamer’s US Open triumph, the new Ghost series models were engineered under the advisement of PGA Tour coach and TaylorMade Tour Staff professional Dave Stockton.

“The new TaylorMade Ghost series brings the technology and science behind the white colour and alignment cues from previous models to a wider audience then ever before,” said Stockton.

“I’ve never seen a series of putters that are so easy to aim.”

At impact, the loft of the putter face (typically 4°) lifts the ball off the ground and imparts backspin. When the ball lands, it skids and bounces before forward roll and constant ground contact begin.

During this transition, from linear movement to rotational movement, the unpredictable nature of the skid phase of the putt can easily throw the ball off the intended line. Bouncing causes lateral deviation, which leads to missed putts.

Secondly, when effective loft is too low, the putter cannot sufficiently launch the ball cleanly from the depression it rests in on the green.

The ball is driven forward or downward into the grass sitting immediately in front of the ball, causing the ball to bounce. Bounce steals momentum, so the ball rolls shorter than intended.

Bounce can also cause the ball to deviate from the intended target line, especially if the ball should hit small imperfections on the green.

In summation, PURE ROLL inserts help to reduce skidding, promoting precise line and optimum speed control. The result is a smoother roll and better overall performance on the greens.

TaylorMade have done it again.

When you think a product can’t get any better, it does. The new Ghost series putters are set to be a big hit Down Under this year, offering club golfers an easy alignment club that boasts some ‘white-hot’ Ferrari-good looks.

We road tested the blade version and found it to be perfectly balanced and indeed, easy to line-up with the target.

And, as TaylorMade claim, the PURE ROLL technology in the face of the putter seemed to promote a smooth forward roll

It will stand out in the pro shop, so don’t walk past it without giving it a go.