A major difference between stroke play and match play is that you are not required to hole out on each hole in order to ‘score’ in match play. 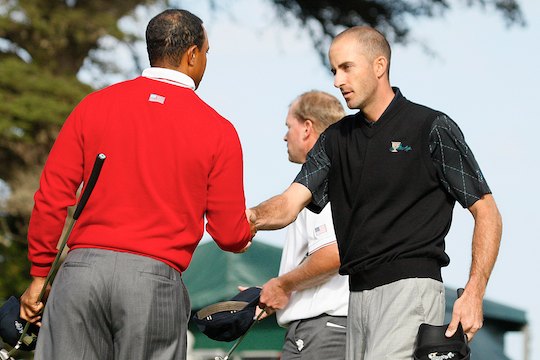 You may concede a match at any time prior to the start or conclusion of that match.

If, for example, you realise that you are unable to meet a match play schedule, you can concede the match to your opponent before starting it. If circumstances subsequently change to allow you to meet the schedule (e.g, the match is postponed) you cannot re-enter the competition because your original concession stands and cannot be revoked (Decision 2-4/20).

You may concede a hole at any time prior to the start or conclusion of that hole. Since a concession is binding, knowledge of the Rules is a distinct advantage in match play, as illustrated by Decision 2-4/12 as follows:

In a match between ‘A’ and ‘B’, ‘A’ putts out of turn. ‘B’ incorrectly claims that ‘A’ loses the hole for putting out of turn. ‘A’ protests but concedes the hole. Later, ‘A’, having consulted the rules book, lodges an official protest with the committee.

However, although you cannot withdraw a concession, Decision 2-4/9 explains that if you win a hole before conceding it, the concession doesn’t count.

In a match between ‘A’ and ‘B’, ‘A’ has made two strokes and the ball with which he made his second stroke out of the rough is on the green. ‘B’, having played five, concedes the hole to ‘A’. ‘A’ then discovers that he has played a wrong ball to the green.

What is the ruling? ‘A’ lost the hole (Rule 15-3a) before ‘B’ conceded it to him. Therefore, ‘B’s’ concession was irrelevant.

Conceding The Next Stroke

It should be noted that your caddie does not have the authority to make a concession for you and any such concession would be invalid (Decision 2-4/3.5).

It is also recommended that you make any concession clear and precise. Ambiguous statements, especially if they could be misconstrued as concessions, are the cause of many disputes in match play. A statement such as “pick it up” is certainly clear enough. Confusion often arises when the word “good” is used after an opponent putts; does it mean that the next putt is conceded or is it simply a comment that it was a good putt?

The following Decision (2-4/3) was included to assist committees and their representatives to resolve such disputes:

In a match between ‘A’ and ‘B’, ‘B’ made a statement which ‘A’ interpreted to mean that his (‘A’s') next stroke was conceded. Accordingly, ‘A’ lifted his ball. ‘B’ then said that he had not conceded ‘A’s’ next stroke. What is the ruling?

If ‘B’s’ statement could reasonably have led ‘A’ to think his next stroke had been conceded, in equity (Rule 1-4), ‘A’ should replace his ball as near as possible to where it lay, without penalty.

Otherwise, ‘A’ would incur a penalty stroke for lifting his ball without marking its position — Rule 20-1 — and he must replace his ball as near as possible to where it lay.

A clear concession would have prevented such a dispute.

Since your opponent plays alongside you in match play, you get to see exactly how well or how poorly he or she is playing. Strategy is therefore an important element of the game and various strategies are employed with regard to concessions; particularly when an opponent is putting. Many regard this as the “fun” part of competing in a match.

Players will generally concede short putts if they believe their opponent will make the putt. However, some players don’t concede putts of any length; perhaps in an attempt to put their opponent off their game.

Others will offer an opponent a concession believing it increases the odds of having some of their putts conceded too. Fail to concede an early short putt and your opponent may not concede anything to you.

A clever player will adjust his or her strategy depending on whether their opponent is a good or bad putter and they will exploit any weakness. A great putter is probably going to make all short putts anyway, so you probably won’t gain much by insisting that they putt everything within say, two feet – at least early in the match – except to perhaps give them more putting practice. A terrible putter, however, could miss putts of almost any length.

Some ‘experts’ at match play believe you should concede every short putt early in the match so you can stop conceding at a critical point later in the match. Say the match is all square on the 18th hole, and your opponent faces a two-foot putt with some break.

Since you’ve conceded every two-footer today, the fact your opponent hasn’t had to make any of these in the match to this point increases the odds that he or she will miss this one.