It’s all about eye contact! On a golf course, I mean.

Forget slow play, for a moment – there are heaps of other things we need to teach golfers before they even learn how to slow down when they actually get to their ball and start deciding how to hit it. 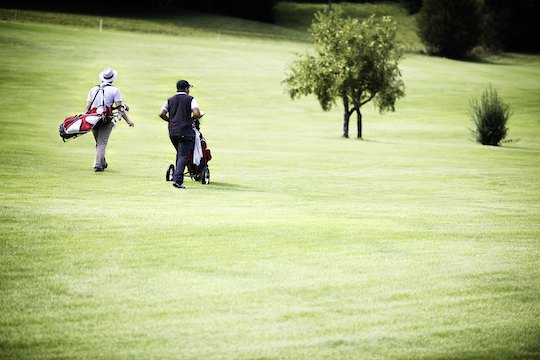 We struck some newbies (new members) at our golf course the other day and were quite relieved when they meandered over to the first tee and obviously intended to hit off behind us.

It didn’t bother me that there were two of them – a man and a woman – and they only had one set of clubs.

It seemed obvious that she was out to watch her ‘loved one’ play.

We didn’t really expect to see them again that day and naively went on our way.

So imagine our surprise six holes later when we hit out tee shots on a blind par five and came over the hill to see them standing on the fairway – our fairway – having practise swings – yes, both of them.

He had a couple of air swings and she hit a lovely ball towards the green and proceeded to check his set-up and make a few adjustments.

Eventually they heard our exclamations and looked back to see us – arms raised, clubs raised and voices starting to raise – and they moved slowly off towards the green.

They didn’t even bother to putt out – ‘good’, I thought, neither should they – two people with one set of clubs who cut in front of you don’t really have any rights of a golf course. Do they?

As we putted out they carefully avoided eye contact and both hit tee shots (actually he might have hit two balls too, but I really wasn’t watching) and they strolled off down the fairway.

So we putted out and waited another five minutes while they had practise swings and made sure they didn’t look back at us.

When they were out of range and walking on to the green we hit our tee shots and moved at a leisurely pace to our golf balls and proceeded to hit them onto or near the green on this par four.

We putted out and slowly moved to the next tee and guess what? They were still there practising their swings and hitting balls with their one set of clubs.

“That’s it, I’m reporting them to the committee,” said my golfing partner.

“Sure, sure,” I thought to myself. We’ll probably never see or hear of them again.

So we played the last – a par five – and again waited while they putted out.

By this time we were seriously considering the pros and cons of just hitting up on them and facing the consequences.

I mean, you tell me, who is at fault here? Them or us?

Still there is some justice in the world.

It was late in the afternoon when we finished and there were only three cars in the carpark – our two cars and our “non-eye contact” friends from the course.

And guess what? The carpark gates were locked.

“Excuse me sir,” he asked in a congenial fashion.

“Do you know how to get out of the carpark?”

I answered: “Yes, thanks,” and turned and walked to my car and started putting my clubs away.

I felt better already – I had got “square” in my own way for what they subjected us to.

Now don’t start ringing or writing to tell me that two wrongs don’t make a right.

I did help our friend get out of the carpark that night. He actually introduced himself and explained that he was a new member.

I told him I’d look forward to seeing him back and I would explain a few of the “unwritten” laws of golf to him when next I saw him.

I might even play a few holes with him next time.

OK, OK, I’ll try and stop him from cutting in on other players too – and playing with one set of clubs per player – and teach him to call players through etc etc.

You see, there is a lot more to golf than we think at times.

And I’ll even promise to make eye contact with him – next time.