Rules Of Golf: Dealing With Your Lost Ball

We see it on the golf course every day….and most times we can only shake our heads and wonder!

Was that ball lost or not – and how did they wind up taking a drop from there? Usually the answers aren’t revealed until the 19th hole – and half the time they are still wrong. 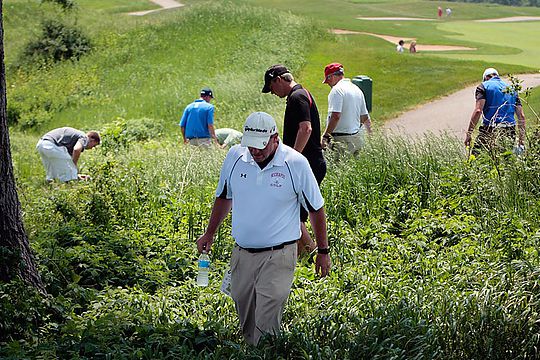 Rules Of Golf: Dealing With Your Lost Ball

That’s because many people cheat at golf and don’t even realize they are in the wrong.

And as George Costanza from Seinfeld would say ‘it’s not a lie if you believe it!’ And George is right – if you don’t know the rules then it’s pretty hard to play by them.

So today we are providing the answers to some of the many and varied scenarios involving a lost ball.

And hopefully, this can help out the next time you are in the clubhouse and arguing about that uncertain drop and the Rules of Golf regarding Rule 27-1 and Definition of Lost Ball, unless otherwise noted:

Q: Once a player has declared to a fellow competitor that their ball is lost they may continue play with a provisional ball that has been played, or another ball.
A: False. If a player’s original ball is found in bounds, within the time permitted following search beginning for it and before another ball has been put into play, the player must continue play with it, no matter what they have said about the ball being lost.

Q: What is the time limit permitted for a player’s side, or their caddies, to search for a ball? a) 4 minutes b) 5 minutes. c) There is no time limit, providing the player does not unduly delay play?
A: b) 5 minutes.

Q: If a ball cannot be found and a provisional ball has not been played, the player may drop a ball in the area where the ball is thought to have been lost for a penalty of two strokes.
A: False. The player must return to where they last played from under penalty of stroke and distance.

Q: A player drives both their tee shot and a provisional ball into dense trees and they do not find either ball within the permitted search time. How many strokes will they have played when they put another ball into play from the teeing ground?
A: 5 strokes.

Q: Time spent in playing a wrong ball is not counted in the time permitted for search. True or False?
A: True.

Q: If a player makes a stroke at a provisional ball from a point nearer to the hole (point Y) than where their original ball is likely to be (point X), that ball is in play. True or False?
A: True.

Q: A player does not have to search for their ball if they do not want to. True or False?
A: True. But if their ball is found within five minutes of being lost (usually by your opponent) and before they have put another ball in play they must continue with it.

Q: If a player makes a stroke at a substituted ball their original ball is lost. True or False?
A: True.

Hope this helps – now get out and there and DON’T lose a ball!