Most golfers are aware that, if their ball lies in a hazard (whether a bunker or a water hazard), the rules prohibit testing the condition of the hazard, or any similar hazard, before playing from it.

They are also aware that they can’t touch the ground in the hazard or water in a water hazard with their hand or a club prior to making a stroke from the hazard. 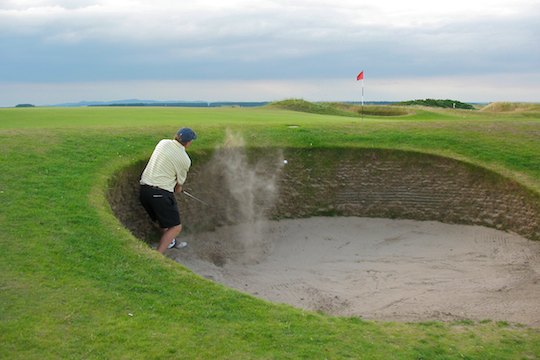 There are three exceptions and a note following Rule 13-4 which allow such actions in certain circumstances (see pages 65 and 66 in the new Rule Book). If you don’t have one, ask at your club for a copy; they’re free!

The new rules code, which took effect from January 1, 2012 and will remain in force for four years, amended Exception Two to permit a player to smooth sand or soil in a hazard at any time, including before playing from that hazard, provided (1) it is for the sole purpose of caring for the course and (2) Rule 13-2 is not breached.

Caring For The Course

An action taken for the sole purpose of caring for the course is one which is encouraged in the Etiquette Section of the Rules of Golf.

For example, on page 20 of the Rule book, the following is suggested under “Care of the Course” in a bunker:

“Before leaving a bunker, players should carefully fill up and smooth over all holes and footprints made by them and any nearby made by others. If a rake is within reasonable proximity of the bunker, the rake should be used for this purpose.”

If, for example, your ball is in a bunker and you retrieve a rake lying in the bunker some distance from your ball, you would be entitled to smooth the footprints you made in retrieving the rake before playing a shot at your ball in the bunker.

The two provisos are that the raking is done without intentionally testing the condition of the bunker and that Rule 13-2 is not breached, which will be covered shortly.

A new Decision (13-4/9) gives some guidance on whether a breach of the Rules has occurred when smoothing footprints in this situation.

The Decision states, in part:

If, however, a player is regularly creating and smoothing footprints close to his ball prior to making strokes from bunkers, it would be appropriate to question the player about the purpose of the smoothing.

In such circumstances, the smoothing might be for the purpose of gaining knowledge of the condition of the bunker rather than being for the sole purpose of caring for the course.

If so, the player would be in breach of Rule 13-4a for testing the condition of the hazard.

The penalty for a breach of this Rule is two strokes in stroke play and loss of hole in match play.

It has been mentioned a couple of times that the action taken in caring for the course must also not breach Rule 13-2.

This Rule advises that you must not improve or allow to be improved:

So, if after retrieving the rake in the above example, you were to smooth footprints in the area in which you will be taking your stance or in an area in front of your ball on your line of play, you will be subject to penalty.

Since the revised Rules were publicised in November, 2011, some golfers have expressed concern that the revision to the Rule discussed in this article will make it easier for the very few who disrespect the Rules to gain an advantage over those who always “play by the Rules”.

However, the revisions do make it much easier for the remainder to observe the etiquette of the game for the enjoyment of others playing on the course.