Rules Of Golf: Where Can I Drop It?

After “do I get a drop?” the most frequently asked questions on a golf course are “Where can I drop?” and “Is it one club-length or two?” The answer depends largely on whether relief is available with or without penalty.

In this article we will not discuss relief from conditions on a putting green since the relief procedure requires the ball to be placed rather than dropped. 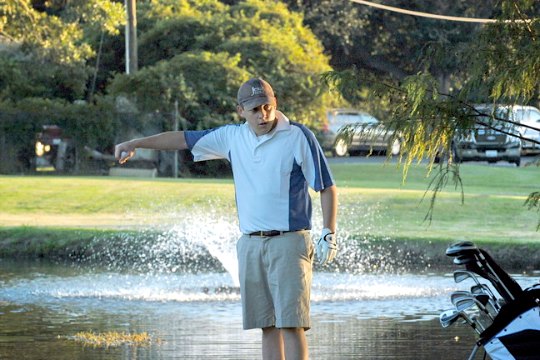 Where Can I Drop It?

When taking free relief under the Rules from an immovable obstruction (Rule 24-2), an abnormal ground condition (Rule 25-1) or a wrong putting green (Rule 25-3), the ball must be dropped within one club-length of the “nearest point of relief”.

The following illustration shows the correct dropping area for a right-handed player from an area of GUR.

While watching a golf tournament at the course or on television, you will often witness the following – a player wishing to take relief from an obstruction (a cart path for example), will select a club and make what appear to be practice swings in an area close to but clear of the path and place a tee in the ground.

The player will then select another club, usually the driver, and measure one club-length from this tee and place another tee in the ground at that point.

After dropping the ball in the area between the tees, the player will then select another club with which to make the next stroke.

The player in this case has followed the procedure to determine the nearest point of relief accurately (see the note to the definition of “Nearest Point of Relief”) and then measured the one club-length area in which the ball is to be dropped.

This is done to avoid the consequences of playing from the wrong place (see Rule 20-7).

A question often asked is whether players must always follow this procedure when taking relief from an Immovable Obstruction or an Abnormal Ground Condition such as casual water or ground under repair.

Thankfully, no! – you must drop the ball correctly and in the correct area but if this can be achieved without using this process it is acceptable (imagine the effect on the speed of play if all players followed the procedure every time they elected to take relief.

The answer to Decision 24-2b/2 concerning relief from an artificially surfaced path clearly explains the principles involved:

“Although there is a recommended procedure for determining the nearest point of relief, the Rules do not require a player to determine this point when proceeding under Rule 24-2, 24-3, 25-1 or 25-3.”

“In such circumstances, the player would be penalised for playing from a wrong place (Rule 20-7).”

In most cases, players taking relief are concerned simply with avoiding interference and will instinctively drop close to their estimate of the “nearest point of relief”, which is clearly within the limits prescribed in the Rules.

The need to follow the recommended procedure becomes important when the player elects to drop at or near the extremity of the dropping area.

In this case it would be wise to follow the recommended procedure to eliminate any question as to whether the ball was dropped in the correct area.

There are some free relief situations, however, which do not give you the latitude of dropping within a club-length of a certain point. When taking free relief under the embedded ball rule (Rule 25-2), the ball must be dropped as near as possible to the spot where it lay but not nearer the hole.

When taking relief under the Local Rule permitting free relief from intervention on the line of play by an immovable obstruction such as a sprinkler head near the green, you must drop the ball at the nearest point to where the ball lay that is not nearer the hole and avoids intervention.

You would only be entitled to drop the ball within a club-length of the nearest point of relief if there was physical interference to your stance or swing from the sprinkler head.

Relief under penalty of one stroke is available if your ball is lost or out of bounds, is in a water hazard or if you declare it unplayable.

In each case, one option available is to play a ball under stroke and distance. Dropping under this option requires a ball to be dropped as near as possible to where the last stroke was made (if the last stroke was your tee shot you can re-tee the ball from anywhere within the teeing ground).

There are further options available under the water hazard and unplayable ball rules. These options require you to establish a reference point for taking relief.

The second option available under these rules is to drop a ball behind the hazard or the unplayable ball reference point, keeping the reference point directly in line with the hole and the spot on which the ball is dropped.

The following diagram illustrates dropping behind the reference point for an unplayable ball. The ball may be dropped any distance behind the ball’s current position along the line indicated by “b”.

The third option is available only for a ball which is in a lateral water hazard or which is deemed unplayable. Under this option a ball may be dropped within two club-lengths of, and no nearer the hole than, the reference point.

An additional reference point (the same distance from the hole) is available for a lateral water hazard on the opposite margin of the hazard.

These options are illustrated for a lateral water hazard in the following diagram.

The guidelines above focus on the common dropping situations. The Rule book should be consulted for more information on the points covered. For example, Rules 24-2 and 25-1 give both free relief and penalty relief options when a ball lies in a bunker.