Daph Faithfull, who won the Redcliffe B grade club championship in July at age 87 with her very first set of new ladies clubs, says numbers are relevant only on the golf course.

“I might be turning 88 in December, but I never think of my age. To me numbers are immaterial everywhere except when I’m playing golf,” she said. 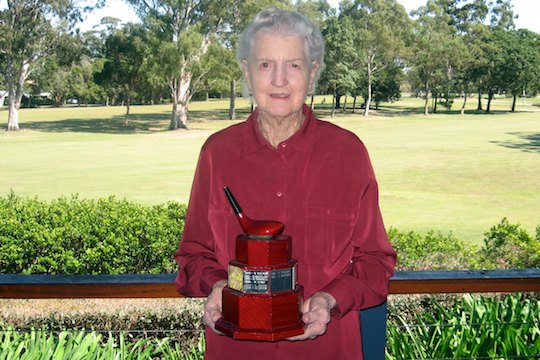 Daph Faithfull with her Redcliffe B Grade trophy

However, during her half century of playing golf numbers have been integral to the success Daph has attained.

She started playing in Townsville almost 50 years ago, has been a member at Redcliffe for 27 years and has never played off 36, which was once the maximum golf handicap for women.

And back in July, numbers were in fact crucial. Under the former handicap system she nudged her way from 17 to 19, which put her in the B grade division for the first time since she was a virtual learner.

She went on to win the championship in that grade, but a few weeks later, when a new handicapping structure was introduced, her handicap was sliced back to 18 and she is in A grade once again.

She accomplished this feat with a new set of women’s clubs – her first. Formerly she had played with men’s clubs.

“I am fairly tall, and strong, and I always liked the feel of men’s clubs,” she explained.

“But recently I had a fall and lost some strength in my arm, and I felt I needed lighter clubs. I don’t hit the ball as far with these, but I think they suit my game now.”

The chirpy 87-year-old, who says she can walk out her back gate and in to the bunker beside the 10th green, is seen around the Redcliffe course almost every day in some capacity.

The garden adjacent to the 16th hole has been named ‘Faithfull Garden’ in honour of Daph and her late husband George, who have worked tirelessly over the years to keep the course in good shape. Daph now tends to the garden almost daily.

But her involvement has not been just on the course. She has served twice on the ladies committee at Redcliffe – one year as president and three years as vice-president.

Daph has also competed in A grade pennants for 23 years, won the Queensland seniors championship in 1985 and won the Brisbane and district senior championship in the early 80s.

When asked about her unbridled enthusiasm and energy, Daph is adamant golf and her associated activities are her elixir.

“I do Pilates five mornings a week and my intention is to stay fit and healthy, and keep playing golf until I drop,” says Daph who plays 18 holes every Tuesday and Sunday.