A salute to the real heroes of the game

Serving this great game of golf is something we too often take for granted.

And the effort of so many of our amateurs to continue to be unsung heroes of the game should never be under-estimated. 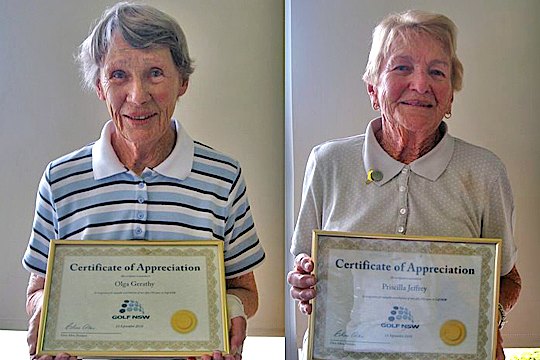 A salute to the real heroes of the game

So it was a proud day for two Forster-Tuncurry Golf Club stalwarts Olga Garathy and Priscilla Jeffery last month when they received recognition of their service to the game.

The pair have more than 50 years service to the game in this state.

Olga began her golfing career when she was just 15 and played at Cobago and Bega.

She later moved to Massey Park, where she was a member for three years before moving across to join Bonnie Doon of 10 years before joining the Forster/Tuncurry club 42 years ago.

Throw in the fact Olga has also notched up seven holes-in-one and you can see we have serious golfer on our hands.

It was a fantastic effort.

Her volunteer activities saw her serve as President of the women veterans committee for several years.

At club level she also served as a woman board member, women’s captain, president and, for the past 10 years, she’s been patroness of the women’s committee.

She has also served as vice-president of the WGCNC district for five years.

Olga couldn’t hide her enthusiasm when she received her certificate:

“My greatest pleasure in receiving this award is the assurance that Golf NSW still cares for veterans and aged golfers, who form a large part of the great game of golf.

“I have had many years of enjoyment hitting that little ball around numerous golf courses only to discover it has a mind of its own.

“However, I still accept the challenge of being in the winning circle and that is the great game of golf.

“My best wishes to the NSW Golf controlling body and once again thanks for my recognition”.

As for Priscilla Jeffery, she has been a full playing member of the Forster/Tuncurry Golf Club for almost 60 years and is presently a patroness of the club as well.

During that time Priscilla has served on the women’s committee as vice-president and house convenor for a 20-year stretch.

She has also donated numerous trophies over this long period of time and still donates a trophy for Patroness Day.

Priscilla is a great cook and always makes pies and cakes for the club’s fundraising stalls or afternoon teas on special days.

She is an inspiration to the club’s members and still enjoys taking part in competitions at both Tuncurry and Forster courses.

In 2009 Priscilla she won the C Grade foursomes championship with Betty Harris, who is also over 80.

Priscilla commented: “It has been a pleasure for me to have worked over my years with the association and to have made the many true friends that I still have.

“I am sure to have played for so long it has been a positive help to my good health.

“And I would like to thank Golf NSW for my appreciation award.”