These are the real heroes of our game

Next time you tee up for a game at your local club, try this on for size? Imagine if you played in every one of your club championships for 46 years?

Or you were back playing golf just six months after heart-bypass surgery? Or you are still playing golf despite being more than 80 years of age?

All this and you are still pitching in to volunteer whenever the club needs help with anything. 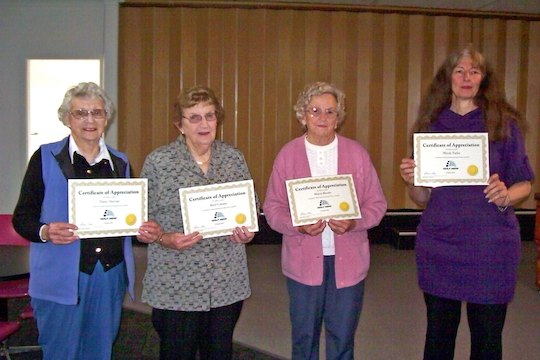 These are the real heroes of our game

These are the stories of the amazing women who have been honoured by their golf clubs for more than 50 years of service to golf in New South Wales.

Branxton Golf Club presented Melita Watson and Pauline Thomas with their awards in front of at least 60 family and friends.

Quite a few tears were shed as the surprised women accepted their certificates amongst nostalgic faces and seeing many friends who they played with and had returned for the occasion despite having left the area.

For this small Hunter Valley club it was quite a celebration.

Melita Watson joined Branxton Golf Club as a 13-year-old girl in 1960 and is well known in the area.

Melita has held every single position in the Branxton Golf Club and has been the captain for a number of years. The pages would fill up showcasing her tireless work and achievements.

She held a very significant record from 1960, unbroken up until a few years earlier. Pauline played in every championship for 46 years total holding numerous club records.

She has served as club captain for 14 years, president and vice-president for a number of years and was also the club’s district representative from 1966 to 1976. Due to her ill health, Pauline’s playing days have become erratic; however she still manages to drop in to support the ladies.

In 2004, six months after her bypass heart surgery, Eileen Potter went back to playing golf and is still going strong at aged 85, with a handicap of 26.

She represented the club in bronze I, bronze II, won the Bronze I championship numerous times as well as the mixed foursomes, foursomes, WGNSW Medal and the Gold Medal, and won the 2007 Botany Golf Club division two championship.

Nola Burke from Long Reef Golf Club was overcome with pride when she received her certificate.

She joined the club in 1960 and at 81 years old plays off a 37 handicap and is a regular in their 11-hole competitions.

She also represented the club in pennants and caddied for the club’s Grade and Bronze Medallion teams up until 2007.

She was recognised in 2008 for 45 years of attendance at the Duntryleague of Golf at Orange. Nola has been a valuable member of the Long Reef Golf Club and is always supportive of its women members.

Dunedoo women golfers would not be the same without their dedicated volunteers. They recently presented four of their members the 50+ Years of Service to Golf in NSW Certificate.

The surprised trio of Beryl Cannen, Elaine Hurcum, and Marcia Rhodes were overjoyed when they were presented the award. Wendy Taylor was unable to make the presentation, however was given her certificate at home and was equally surprised.

Ollie has been hooked on the game ever since.

When she joined the annual fee was 21 shillings and the winning prize at the time was 7/6 and a ball!

She even met her husband Brian on the golf course.

Ollie won numerous championships in C Grade, B Grade, the women’s and mixed foursomes, and played Pennant golf for many years.

Her volunteer duties saw her take on roles on the women’s committee as captain, president, patroness and now a life member.

She continues to work as a volunteer for the club’s charity golf days and junior tournaments.

Ollie recalls her greatest golfing moments was playing in the local pro-am with Nathan Green – and winning the Holden Scramble twice in three years.