World Golf Tour? The Ladies have it

Back in 1994, Greg Norman advanced the concept of a World Golf Tour, which he envisaged would co-exist with the main tours to showcase the world’s best golfers in a series of limited field events across the world.

The product blueprint was simple enough: get the best players playing against each other on a regular basis, on first class courses televised around the world. 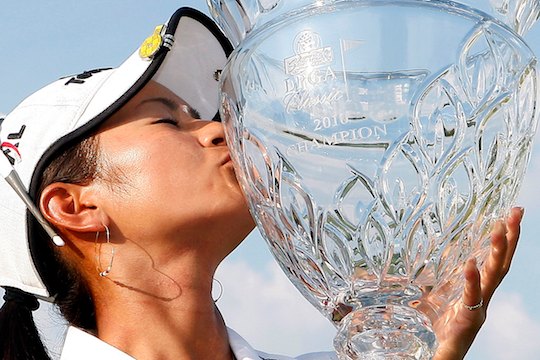 At the time, the world’s best included the likes of internationals Nick Faldo, Ian Woosnam, Nick Price, Bernhard Langer, Jose Maria Olazabal and Norman himself, a great platform to market and promote a World Golf Tour.

The PGA Tour saw this as a threat to their schedule, existing TV contracts, sponsors and charities and unfortunately the opportunity to discuss and negotiate a compromise position was scuttled before it had a chance.

The concept however did provide the catalyst for the brace of World Golf Championship events we have now, most of which are based in the United States I might add.

When you think about the Shark’s vision for his World Golf Tour, you could argue a version of this is in place right now. It’s called – the LPGA.

In fact, include the Ladies European Tour (LET) schedule, which has had tournaments scheduled in Australia, New Zealand, China, Korea, Morocco and Dubai for years now, and you could argue the World Golf Tour is in fact: ladies professional golf in general.

A combination of domestic economic circumstances and willing partners in burgeoning international golf markets has seen the LPGA extend their reach with tournaments in Mexico, Singapore, South Korea, Thailand, Jamaica, Brazil, Canada and the co-sanctioned majors in Great Britain and France.

The latest addition was the Simes Darby LPGA Malaysia last October in Kuala Lumpur. This is fantastic expansion from even 10 years ago, when outside of the Women’s British Open, the LPGA ventured outside the United States on only two other occasions.

The top of the Rolex Women’s World Rankings has been dominated by internationals for the better part of a generation now with the most recent standout world number one players (Annika Sorenstam and Lorena Ochoa) both born outside of the United States.

Add to this a support cast which include drawcards such as Hall of Famer Karrie Webb, fellow Aussie Katherine Hull, Morgan Pressel, Brittany Lincicome, Sakura Yokomine, the ageless Laura Davies and Natalie Gulbis and ladies golf is an attractive pot pourri of talent at the moment.

The great thing about this situation is that more often than not, this elite group are seen competing together in ‘all’ of the LPGA’s international events and a great many of the LET tournaments. Getting all the best players to these events all around the world is a situation that arises far more frequently than their male counterparts can boast.

They ought to be applauded for this as by taking their skills on the road they’re supporting golf in places other than their own backyards, raising awareness and funds for local charities and enriching their own and the lives of many in the process.

Hopefully these events will thrive and continue to be mainstays of a real world tour on the LPGA and LET, supported as they are now by the game’s elite.

Back home in Florida, Greg Norman should be applauding and smiling at the irony.